(You'll pick your shipping method in the next step)

Details of the Crystal Grid created for the Spring Equinox 2021

Details of the Crystal Grid created for the Spring Equinox 2021 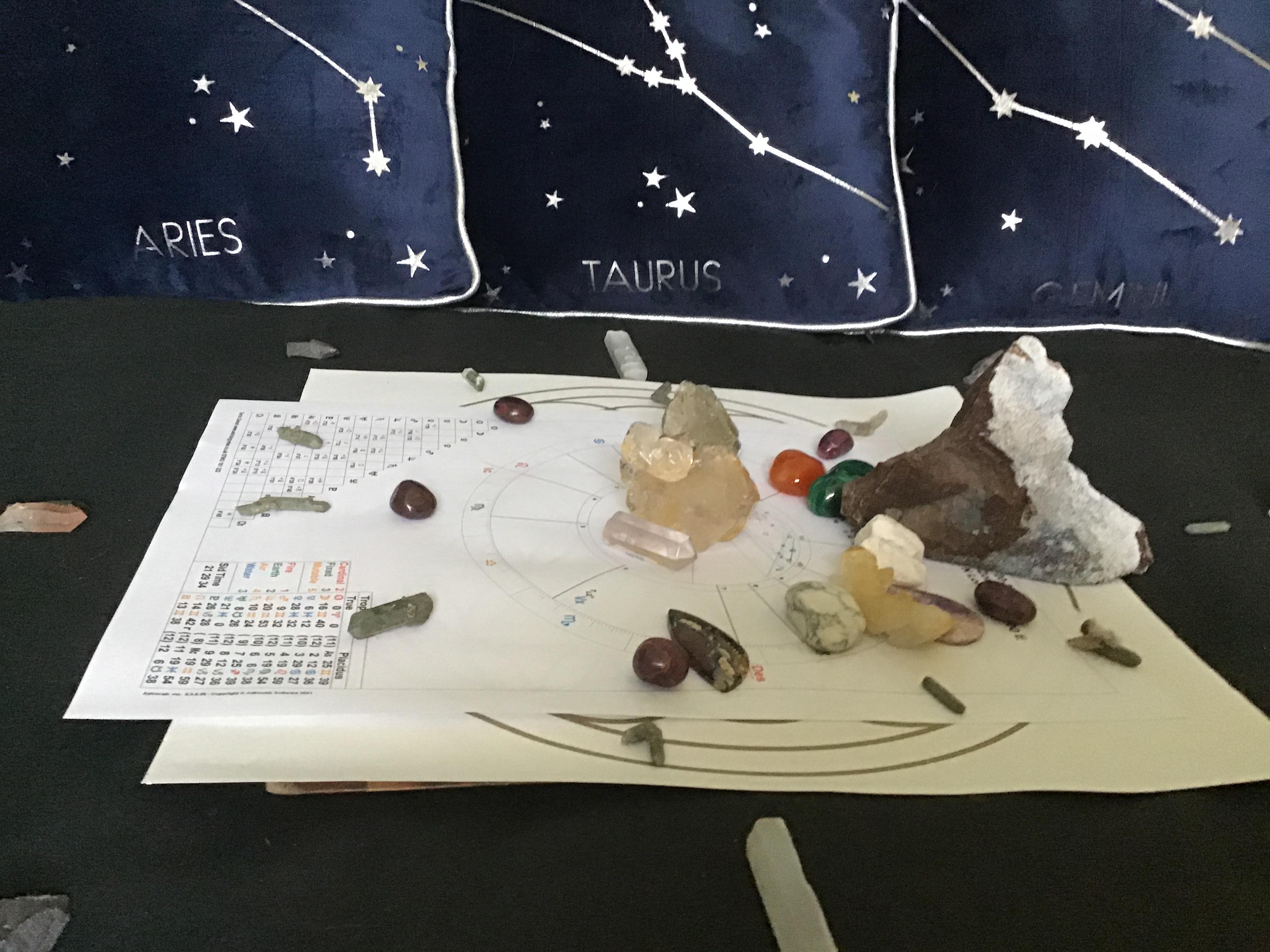 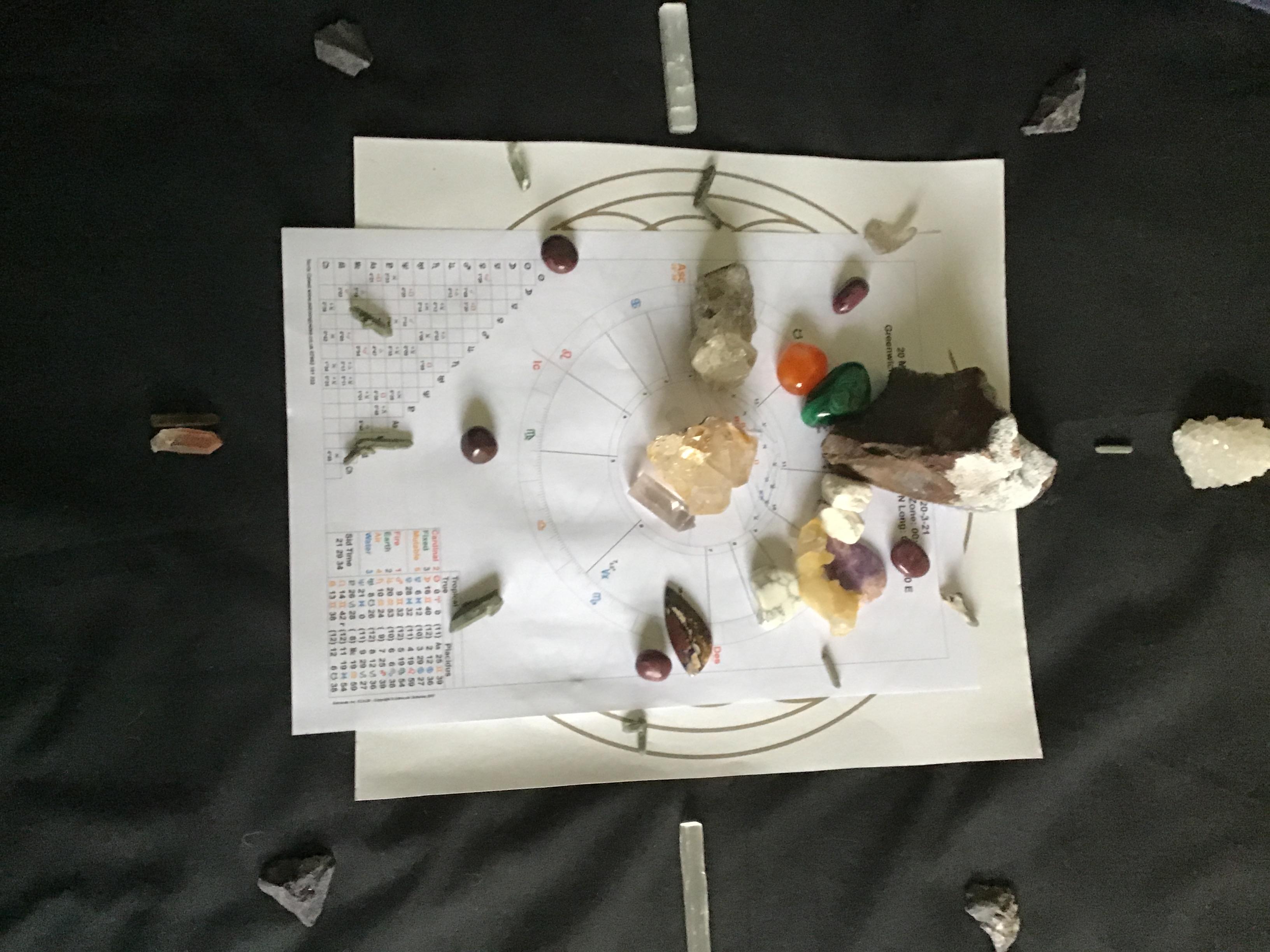 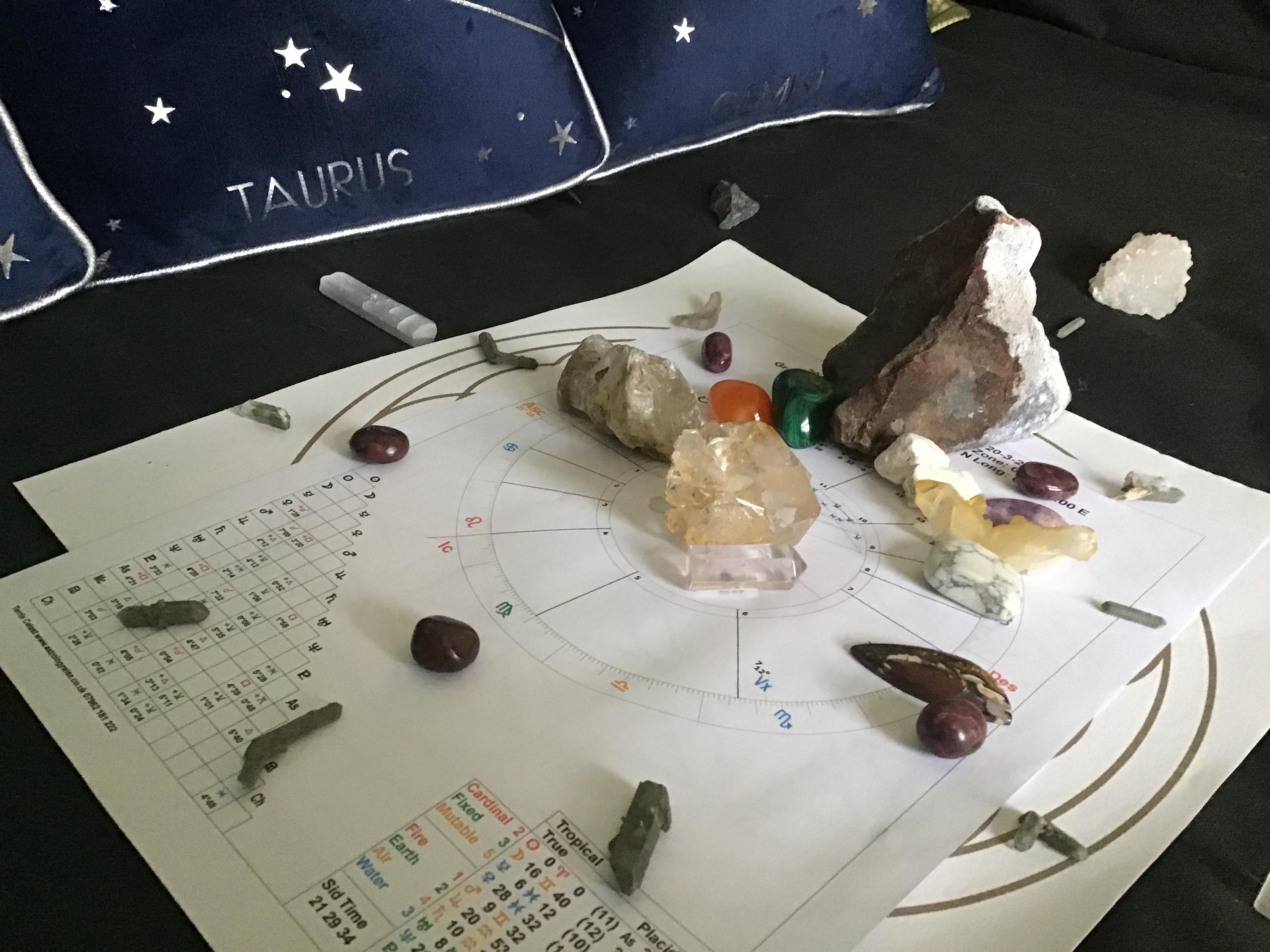 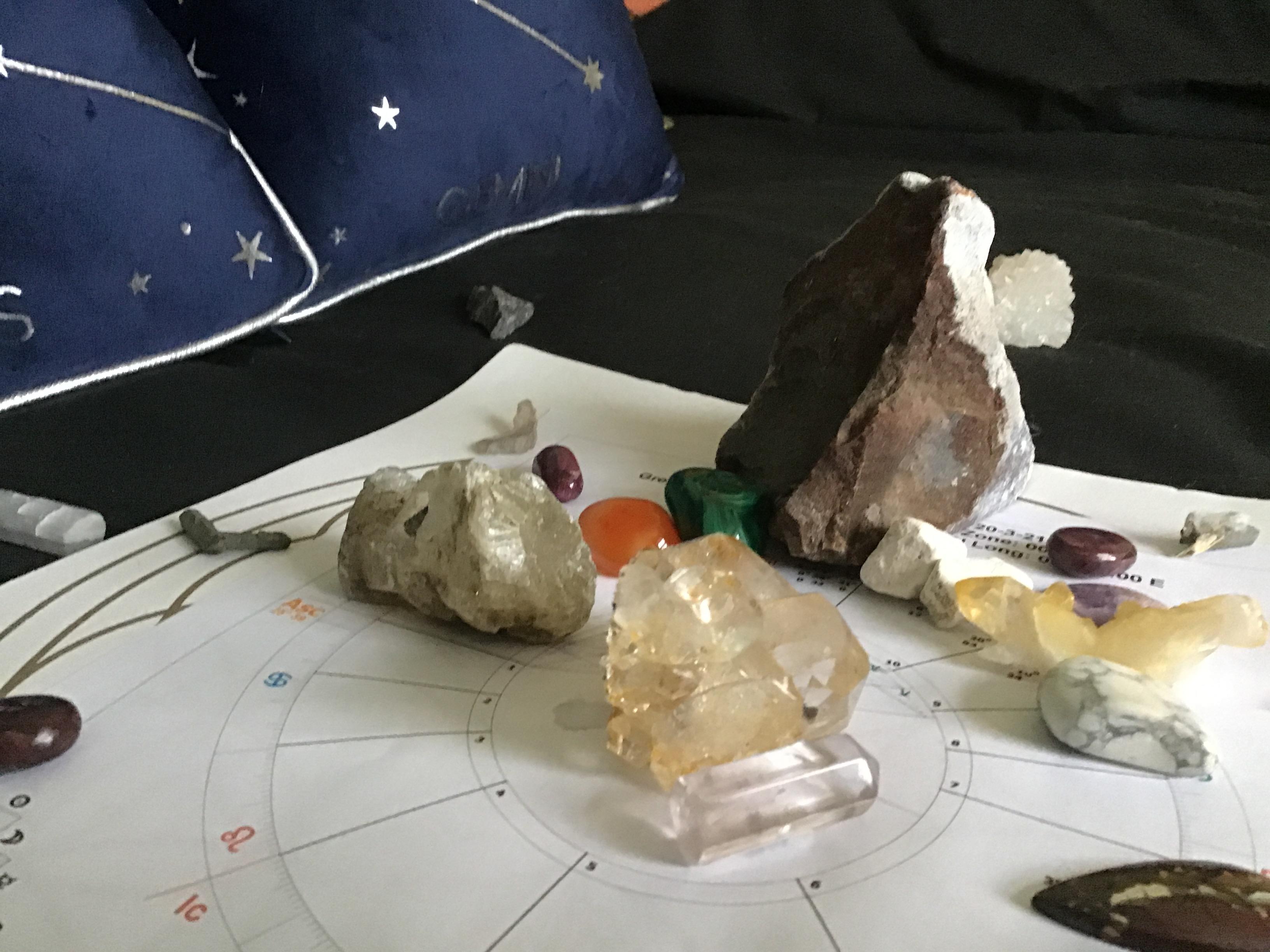 The chart for the Spring Equinox gives us a flavour of the coming three months up to the Summer Solstice on June 21st . The chart was set up the day before, bringing in the energies of the old astrological year as it came to a close, and the transition into the new year at the Equinox. These energies will help us with any personal transitions that we are going through and will be experiencing over the coming three months, and with the upgrade of energies from 3D to 5D that the planet, and we, are undergoing.

I captured the energy of this chart and crystal grid in a selection of crystals, mainly varieties of Arkansas Quartz. If you would like one of these to support you over the coming three months, they are for sale here.

Below are details of how the grid was created.

Creation of the grid

Golden Flower of Life was placed on a black cloth, bringing in sacred and Universal energies, unlimited potential and creativity.

The chart for the Equinox was placed centrally on the Flower of Life.

A large Golden Herkimer was placed in the centre of the chart; this position represents the self, as if we are in the centre, looking out at the Universe around us (geocentric). The Herkimer was acting like a battery, pulling in charging energies from the chart and the surrounding crystals and then distributing them to the individual crystals (see below).

An Amethyst generator crystal was laid beside the Herkimer, to assist and amplify.

A large piece of Clear Fluorite (Yorkshire, UK, which arrived only a few days before) was placed over the Gemini cluster of Mars, North Node and Moon. Gemini is ruled by Mercury, the planet of the mind and communication and Fluorite is one of the best crystals for the mind, bringing clarity (emphasised by the Clear variety), focus and balance. Clear Fluorite works with the Crown Chakra and helps to bring in spiritual insights to blend with the intellect of the mind.  I had felt that a Chalcopyrite was needed in the chart to help with the balancing male/female energies that is a key feature of it, but when I dowsed, I didn’t need one, I then discovered that this piece of Fluorite had Chalcopyrite on it, and was the only one in the batch that did, so instead of being separate, it obviously had to be combined with the Fluorite energy.

Sun and Venus – although in different signs, Aries and Pisces, these were adjacent in the chart and a key feature (Venus is the female archetype and Aries is ruled by the masculine archetype, Mars) and one crystal was needed to cover them both, a Gaia Flint which had both the masculine Milky Way Flint (blue) and the feminine Gaia’s Blood Flint (pink/red) in it.

Neptune and Mercury, both in Pisces, needed a piece of Dorset chalk (linked to Neptune), from near the sacred site of Knowlton. (This is not available on the website but I have a small number of pieces, please email me if you are interested).

South Node (in Sagittarius). This originally had a Green Calcite on it for a short amount of time, but this then changed to a Yowah Nut, which also works with balancing male/female, especially within family situations, making it ideal for inner child work. Whether natural or polished, they are equally powerful balancers and raisers of kundalini with a strong Earth connection.

5 x Rubies were placed around the chart, energising, grounding, linking with the Sun and the Base Chakra.

The grid was left for a while to ‘settle and integrate’.

Then, 10 x Chlorite Quartz points were added outside of the chart, (extending the energies out and protecting), aligned with the rubies and spaces in between them. These were clearing negative energies, protecting and linking to Gaia.

Crystals were then added outside of this again;

In the four directions were

1 x Anandalite at top of chart (N), helping to clear the aura and bringing in Source energies. It has a very high vibration with rainbows, harmonises the light body, cleanses and aligns the whole chakra system to higher frequencies.

Pair of Strawberry Quartz Lemurians, one inside the Anandalite and the other opposite in the South. These work with balancing male/female energies and destressing the mind.

2 x Selenite/Satin Spar blades (opposite each other aligning with Ascendant and Descendant, E & W) protecting, anchoring, bringing in bright Source and angelic energies to purify and cleanse.

Between these four points were placed;-

The crystals were cleansed regularly as required, and also sprayed with Ancestral Clearing Spray. Venus and Mars essences (available from Petaltone Essences), were also dotted over the whole grid as and when indicated/intuited.

On 7th day, the Stellar Chieftains were brought in to create a sacred (astrological) space before bringing in the planetary Archangels, aligning to the planets to add their energies to the grid.

The individual crystals were removed later that day. The main grid has remained in place and is currently being used as the core energy in my weekly distance healing sessions.

Astrology for the Spring Equinox

This gives you a flavour of the astrology and its significance; -

The Sun is at the last degree of Pisces on 19th, marking the end of this astrological quarter and the end of the astrological year. The Spring Equinox, when the Sun enters Aries, marking the beginning of Spring, is tomorrow, 20th, so this is a good day to take stock. Think back to this time last year, and see what changes you can notice.

Have we fully embraced the changes that have been presented to us and found the gift in them?

Are we still stuck (internally) in some way?

What do we hope to achieve in the coming year, and what steps can we take to work towards those aims?

The Spring Equinox, one of the quarter days of the year, is on 20th March, when the day has equal light and dark and the Sun enters Aries. Here in the Northern Hemisphere, it marks the beginning of Spring, whilst in the Southern, it is the end of Summer and the beginning of Autumn. It also marks the beginning of the astrological year, although some trains of thought put the real beginning back at the Winter Solstice when the light begins to improve, and although it can’t be seen, growth is going on in under the surface until the light is much stronger and the spring flowers and bulbs pop through the soil. We only have three months from now until the Summer Solstice when the Sun reaches its zenith, and the days begin to get shorter again. During this time, the Sun will traverse Aries, Taurus and Gemini.

The Sun’s ingress into the initiating Fire sign of Aries, ruled by Mars, brings more energy, more joy, more enthusiasm and spontaneity. This is the sign of the entrepreneur, and is a great time to start new projects and set plans into action, but they need to have some long-term structure behind them to avoid them fizzling out, so we need to look beyond the first month and the initiating stage, and have some idea of how to sustain the energy once our initial enthusiasm wanes. Although we might want to go it alone, having someone alongside, that is aware of our aims and can remind us of our plans if we drift off course, and help us to regain our mojo if we lose it, will be a massive help long-term.

The chart for the Spring Equinox gives us a flavour of the coming three months up to the Summer Solstice on June 21st and the key planets are Venus and Mars, the feminine and Masculine archetypes. Mars rules Aries, but is currently in Gemini, where it is closing in on the North Node. The Moon is also in Gemini in the chart, so these three are an interesting little cluster in the Mercury ruled sign of the mind and communication. It will be important not to take on too much or push ourselves to hard, and vital to look after our nervous system, which could become overworked, making it hard to wind down and relax.

Venus is close to the Sun in adjacent signs, but moves into Aries alongside the Sun the next day 21st. These two will be close for a few days, until Venus passes over the Sun on 26th, so how we handle things in the first week after the Equinox could become a significant theme for the three months. Venus’ realms are relationships (connections), finances, self-worth and values, so look out for which of these are showing up most for you during this time. 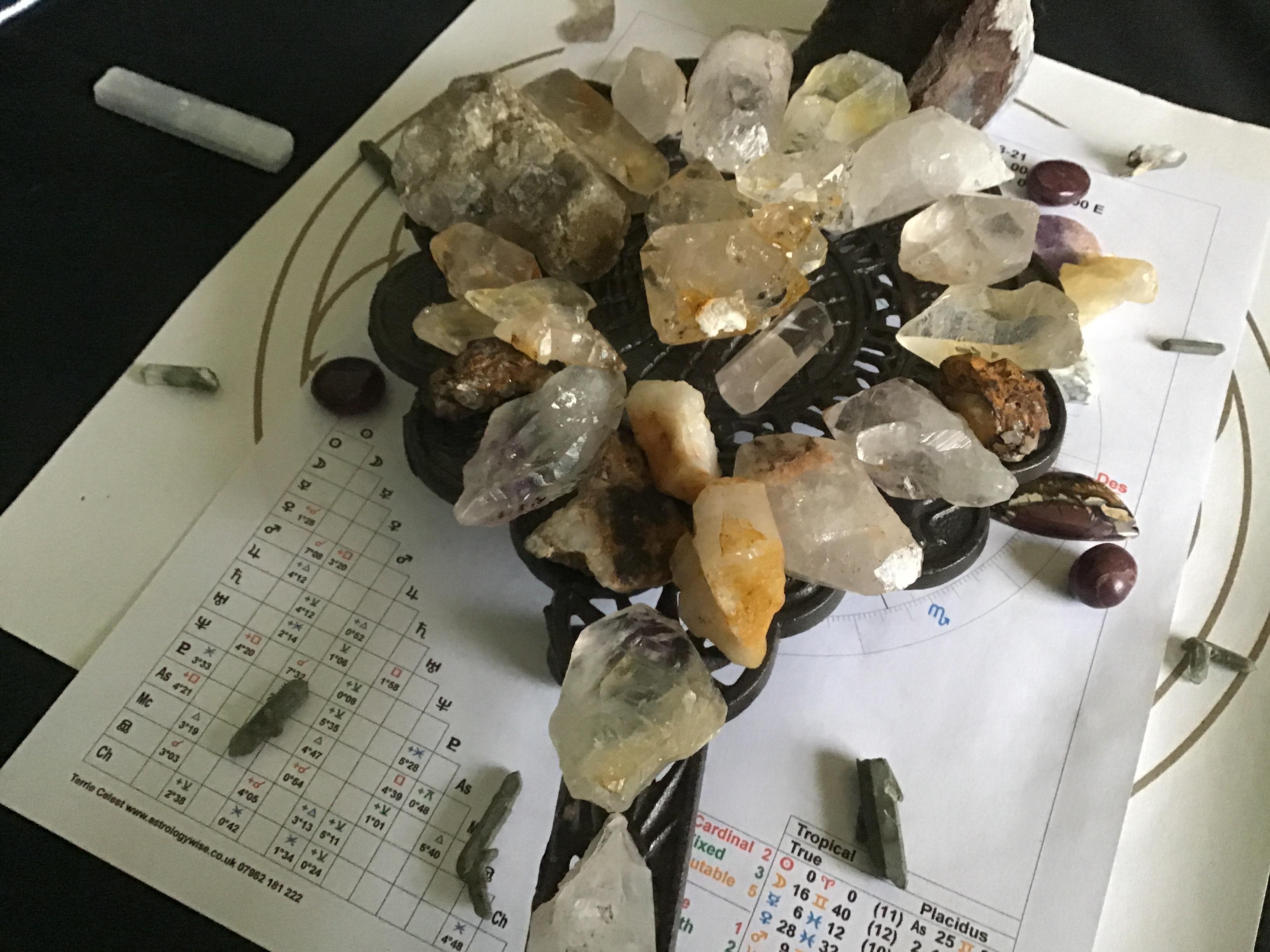 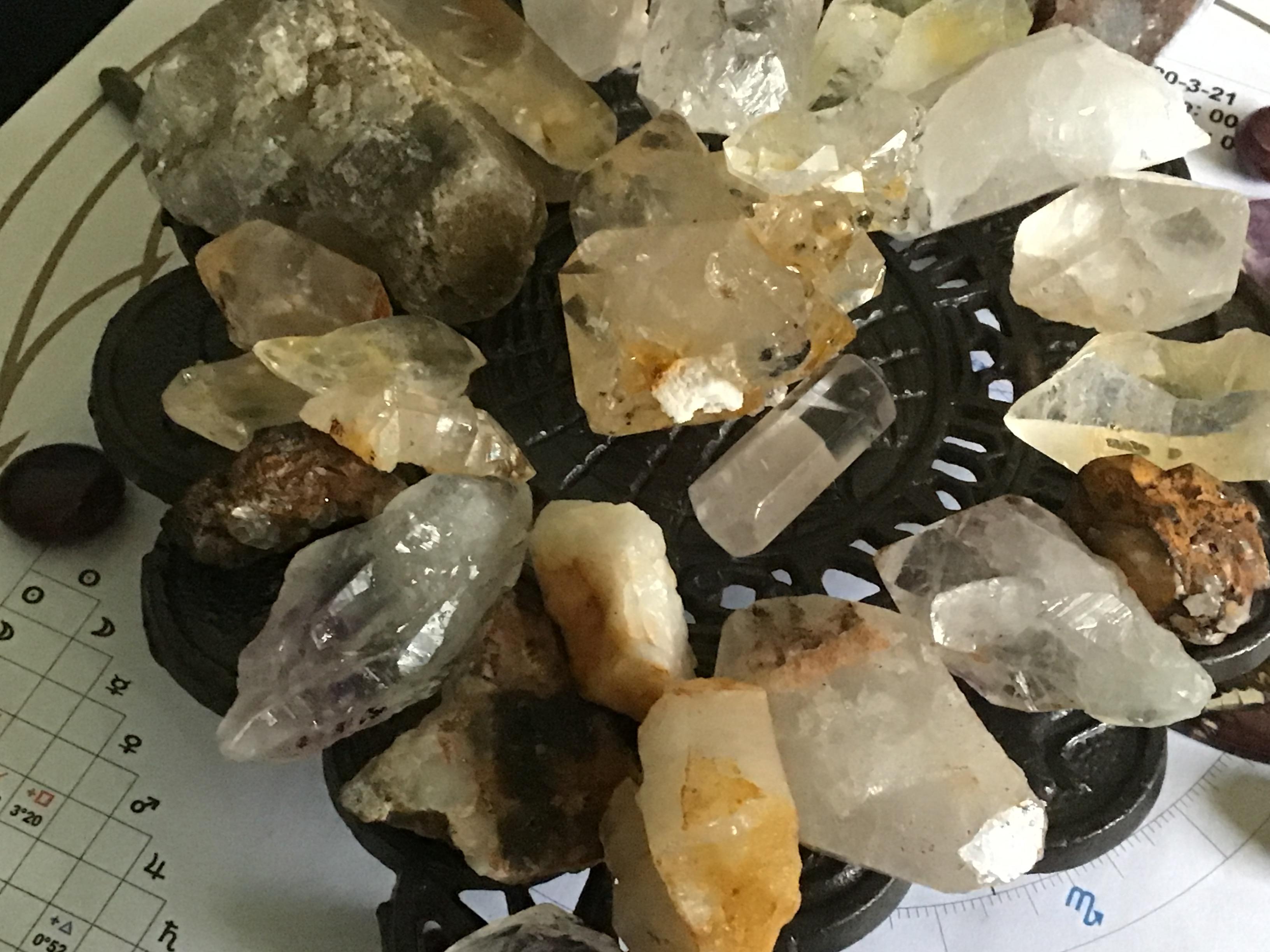 Individual crystals on the 'trivet', sitting above the chart and main grid, being charged via the central Golden Herkimer and Generator Amethyst